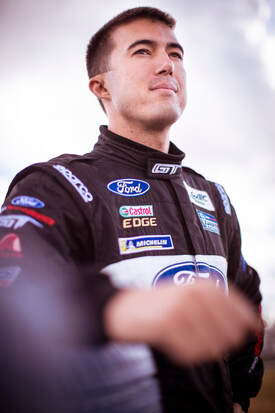 
Billy Johnson made his racing debut in 2000 at the age of 13 racing go-karts.  The half-Japanese Californian has won multiple championships at the local, regional, to national level.  In 2003, Billy moved up into auto racing after winning the Skip Barber Racing School scholarship.  The next day he flew to Valencia, Spain and won another scholarship from BMW AG for the inaugural season of the Formula BMW USA championship.  In the 2004 F-BMW season, Billy Finished 5th in the championship as well as received the Sportsman of the Year award.

Billy is a test driver for Multimatic Motorsports and the Ford Motor Company during the development of the Shelby GT350/R, 2016 Ford GT, Ford GT "GTE/GTLM" race car, Mustang GT4 race car, Mustang Performance Pack 2, 2019 GT350/R, and the 2020 Shelby GT500.  In addition to testing and development, Billy has been hired by Ford to help develop the cirriculum and instruct in the "Road Course Clinic" over the past 10 years, teaching advanced road course techniques and racecraft to their NASCAR Sprint Cup and Xfinity drivers.  He has worked for multiple racing schools over the years and does private driver coaching and development.

In the past 12 years, Billy has more victories and top-3 podium finishes than any driver in the Grand-Am Continental Tire Sports Car Challenge (CTSCC) Series with 23 wins, 49 podiums, and 61 top five finishes.

Billy has been a serious contender in the NASCAR Xfinity series road courses.  He challenged for wins at Montreal in 2012 driving the #60 Roush Fenway Ford Mustang but had to pit from 2nd with 2 laps to go for fuel and finished an impressive 8th place after restarting 21st.  In 2013 Billy had a dominant performance at Road America in the #16 Roush Fenway Ford Mustang before a late race accident damaged his car.  A few weeks later, Billy made his NASCAR oval debut in the #16 Boston Strong Mustang in Loudon, NH.  With only 5 days of oval experience under his belt ever, Johnson finished an impressive 15th place on the lead lap in a field of Nationwide and Cup regulars.